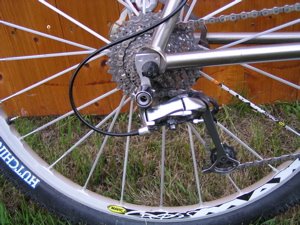 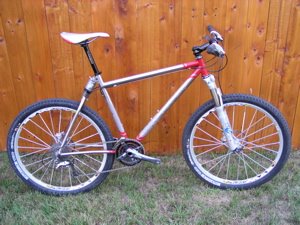 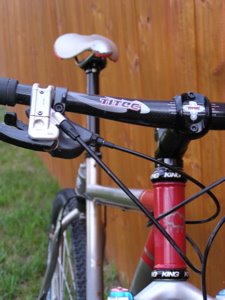 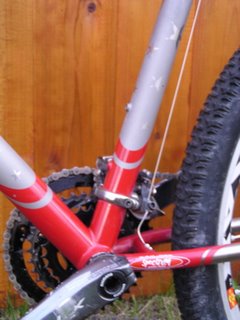 This bike has just one season on it, and was my wifes bike. It is a super light,
fast bike, w/ a sweet beadblasted logo and art, with minimalistic red pannels.
Fresh off a tuneup, it has new chainrings, brakepads, brake bleed, bar and
stem. The XTR cranks are scuffed up from pedalling, but no major dings nor
scratches. The frame is very clean, no dents nor scratches. The rear der is
scratched, but still very true.

Overall this is a very clean ride/ race ready bike. Check out http://
www.blacksheepbikes.com/ for more details on these beautiful bikes.
Posted by 34x18 at 5:15 PM 4 comments:

Keep the Rubber Side Down

Sandi & I hit the trails in CB over the weekend. As we were getting readys at the Snodgrass trailhead, Eric, a rider out of San Antonio rolled up and was asking for directions, rather than send this poor lad off alone, we offered him to hitch onto our ride (Snodgrass, 403, & 401). Glad to have a guide, Eric took us up, and off we went. He had a very nice IF Deluxe, blue & yellow, nicely speced out with FOX and Shimano, and we chatted it up on the first climbs until things started to get fast and narrow. Seeing behind that we had dropped him, I stopped, and waited w/ Sandi. Jokingly I asked, "Did he go down?"

But he did. Now sporting a bloody elbow and knee, Eric made it back to us. He had slid out and Sandi wisely asked him about his tire pressure, "40 psi, why is that too much?" Eric replied.

We thought so with a tubeless setup and Hutchinson Pythons, so after letting some air out, we were off again with about 2 mile of sweet Snodgrass single track left. Just before the end of this trail, there is a fence crossing, there we waited again. A bit later, Eric showed up, this time wearing matching scrapes, scuffs and even torn shorts on the otherside. Eric informed us that indeed he met the trail again, and how he was suprised how scetched out he was. He was a fit rider, or at least looked so and races road and cross, no big deal. With just a few hundred meters left, Eric managed to find the wrong line once more. At first I thought it was Sandi as I heard a loud thud behind me, because she was always on my wheel, but it turned out to be Eric as he was lifting his face off a small wooden bridge. Ouch.

By now, we were geniuinely concerned for this guy, offered to guide him to the top, or offer to give him directions home. He opted to climb w/ us to the top of Washington Gulch. We talked a lot of about riding, racing and what we do in our daily lives, it was nice. But about three-quarters of the way up, Eric who had just arrived from Texas the day before, was in his own words "bonking." We offered to slow up and wait, but he insisted that we go on. So we instructed him on how to get back, and said we will see each other on thursday at the Pinnacle Race in CB.

The rest of our ride was pretty nice, typical CB singletrack, it was a little dry, especially considering the moisture we had the previous week, but still a lot of fun.

Sandi has been tearing up the local race scene, winning the hillclimb, and taking a close second in the first XC to Jenny Smith (who took fourth at the Deer Valley NORBA!) I have been testing some sweet new Piranha's, that hook up in a lot of variable conditions.

Troy from Over the Edge Sports in Fruita sent me this:

We are going to do the Chet Peach BBQ and Race again...

But I have the dates wrong on the tag of my email so... Here's the truth...

*October 21st, Saturday*
Half on Road Bike, Half on MTB... Teams, solo or do either one, details
and course to follow

Sorry for the confusion and thanks for your support and for /staying on
the winning team...

Check out www.otesports for more info, last time was nearly an illegal experience, so don't miss it. I am thinking doing the whole thing on my SS 'cross bike???
Posted by 34x18 at 7:31 AM No comments: 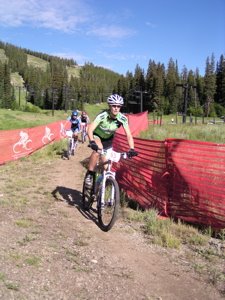 Still in a haze from our trip to Quebec and the following three days on the road for my work, Sandi & I loaded up the van once more and headed out to the Colorado Single Speed Championships in Eldora, part of the Eldora Escape, Mountain States Cup Series. On the line, Womens & Mens Single Speed titles, gold medals and plenty o'schwag. This time it was funny, we had only one bike, my single speed.

After camping in the van over night, we awoke early as Sandi would start early at 8:30am. It was definitely quality over quantity for the womens race, with defending champ Kara Durland, World & National Champ Christina Begy and Catherine Gruener-Goss lining up w/ Sandi to vie for the title. Kara took off fast and set the early pace, but would soon drop back to third as Sandi and Begy set off up the hill. Sandi grabbed the lead, and would not be challenged. Looking strong and smooth, Sandi went from a 2 min plus first lap lead, to a 5 min second lap lead and eventually winning over Begy by nearly 8 minutes, and Kara in third one minute back of Begy.

It was Sandi's real first ride on a single speed, and she really enjoyed it, maybe we will see more of her in the 1x1 class??? 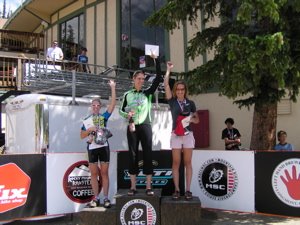 After raising the seat, and a couple of other small modifications, my ride known as the "magic bike" by fellow single speeder Dan Durland, was ready for round two. While warming up, I mingled a bit w/ my fellow single speeders, it was awesome to see so many out for this race. 24 of us would line up to contend for this years title, some very strong legs and lungs. Fellow IF brothers Jon "Rocco" Caligno and Dusty Labarr were on hand, along with usual suspects and some new contenders.

Props have to go out to Thane Wright and Warriors Cycling for putting this event on, and giving us the #1 plate instead of the pros. I was especially proud to have this plate and equally as nervous to defend it. I knew other riders really wanted it, but I was only concerned with one rider, myself. 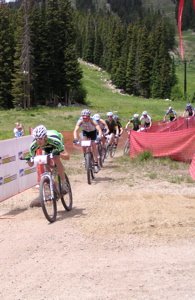 Off the start, I grabbed the holeshot, leading the pack out onto the first climb, Colin McKernan (www.onegear.com) afterwards called my strategy, make everyone else race me. Not setting a super hard pace up the climb, I pushed just hard enough to stretch out the field to see who the contenders and pretenders were. A group of about 5 of us broke off the front, as we hit the woods. Through the endulating double track, I kept everyone honest with my pace, until we hit the steep climb to the top of the course for the first time. I was out of the saddle pushing hard, and then it was only Colin and Tim Graczyk in tow. Gapping those two a little, I had a small breathing space going over the top. I was a little scetched out the first time down the descent having not preridden, and not remembering the line, but still maintained my lead. Tim would work his way back to me as we went through the start/ finish. I think Colin was still in it not too far back, but would eventually pull out. Too bad, 'cause he looked strong early on and could have been a contender.

Going back out on the second lap, I forced Tim into the lead to have a look at him and see what kind of hand he was holding. His climbing was not as fast as I wanted to go, so I lept past him with an easy surge, and never saw him again. Tim would fade to 8th place. I felt pressure the whole race, never opening a huge gap, but kept the hammer down. I turned pretty consistant laps, around :30 min for each revolution. Diging in on the climbs, no brakes on the descents, and keeping the pace up on the flats. On our fourth and final loop, the skies opened up with a bit of rain and hail. This in effect iced my legs, opening them up for my final push to the line, although it did make for some tricky navigation through the slick muddy sections and roots. 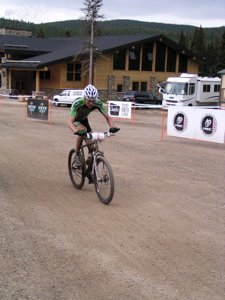 Charging into the finish, I was warmly greeted by everyone as I claimed my second consecutive Colorado Single Speed title. Kris Lathrop nabbed second from Dusty on the last lap, who rounded out the podium. The three of us were schwagged out by 180, Dale's Ale, Left Hand Brewery and SpotBrand. Huge thanks to IF, Reynolds, FOX, DT Swiss, Magura, Titec, Thomson, Hutchinson, Troy Lee Desings, Giro, Smith, CliBar, Fizik, Squadra, Chris King, White Industries, Phil Wood, and Crested Butte Mountain resort for your great support, could not do it w/ out you. 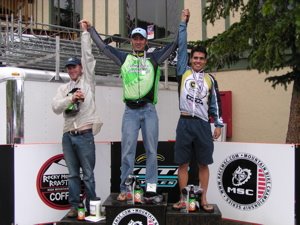