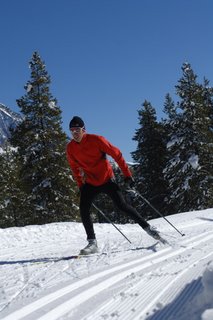 In full stride last season.
Work had me out in the elements the past few days, including a nailbiter of a drive over Monarch & Tennessee passes. Yup, lots o' white stuff and a top of Monarch were a lucky few who were hiking up for some fresh turns. Me? After my coffee obligations were met, I unloaded my new SLab Salomon gear for the first time, and hit the Grand Mesa for an hours worht of skate skiing, just to get my legs under me. Skaet skiing at the beginning of each season is a lot like first single speeding, it hurts! But once you get going, you can't stop, my little training secret for killing it on the single speed. Speaking of which, sounds like Trave Brown is going to do the Birkenbeiner this year, pretty cool.
Posted by 34x18 at 7:24 AM No comments:

I am addicted to Bread, I don't particularly mean the food, but really I am talking about Bread Bakery in Durango. Rob & Jeffy, along with their loveable team down there crank out some of the best baked goods I have ever had, and that is coming from someone who has resided in Europe. So my breakfast (for that matter lunch, dinner and snacks for the drive home) was pretty much decided once I choose to take part in the FLC Squawker Colorado CX Champs on Fort Lewis.

The FLC race was held directly on campus, twisting and turning through campus, which made my single speed a lot of fun with all of the accelerations. The course was similar to our CX race on Western State, but with less elevation change. The day of the race, was a beautiful cool, almost cold autumn day. Karl Keister made the trip, and I thought we would have ourselves a good fight for the Colorado 35+ title, along with a few other gents whom might be interested, including retired pro Frank Maple. Well my race ended before it began, seems my motto in 2006, while doing one last hot lap prior to the start, I tagged one of the many edges on the numerous sidewalk crossings, blowing my rear out. Being the good scout that I am, there was no spare wheel nor bike in the pit, just eight minutes to the start and a Hutchinson Tubeless Foam inflator.

Hoping that the latex already in the tire and this foam might plug up whatever size hole might be inside my tubular, I pumped it up a couple of times only to se foam and latex ooze out the side of the tire. I rolled back to the start to give it a go, but after less than half-a-lap, I pulled out as my rear was once again empty.

Needless to say, Karl dominated the field, taking home 1st. I would rally, jumping in w/ the 3's for atleast a workout, with my floorpump in the pits. I launched off the front early, building a big lead before diving into the pits for a refill on air, the riders came back to w/in 10 sec or so, and with a slowly leaking tire, I would sprint the straights, remount very gently, and nurse the bike otherwise, still opening my lead backout to nearly a minute. There is no way I could have pulled off this race against the Pro's nor Karl, they would have smelt the blood in the water and devoured me. It was fun and all, but not the racing I was looking for.

Sandi & I did an awesome run out at Mill Creek yesterday in 4 - 6" of fresh snow, and with a Winter Storm Warning in effect today & tomorrow, w/ 1' to 2' of possible accumulation, it is time to ski. This season I will be racing in the Master's class in both classic and skate, and maybe even a couple snowboard contests...

The Dutch Grand Prix took place in Holland over the weekend (this is where the stroopwaffles come in), and while Nys continues to show why he is the man, it is great to see a slew of different nations represented not only in the top ten, but on the podium. Wonder how Trebon will do? (read this next part w/ a heavy Govenator accent) German rider Hank Kupfernagel rode back to the top of the womens World Cup by taking the win. The 2 time World CX Champion crushed the field on this muddy track. Ja Wohl Hanke! 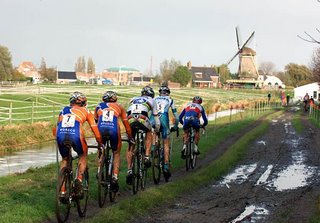 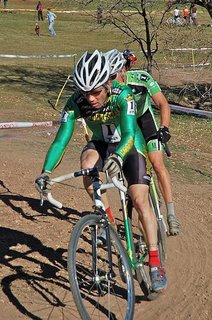 
Landing at the USGP's in the Boulder Valley over the weekend, I sensed a great atmosphere, unique to those special events. And as I searched around for registration, there was a energy abound, as other riders buzzed around on their 'cross rigs. I had myself pretty worked up goping into the weekend, high on expecting solid results having won my first two 'cross events on the season and feeling like I had good form, however I would be tested in other ways. Upon picking up my number (80), I went back and dealt with my pre-race routine, and then at stagging, I learned it would be staged in numerical order...huh? Lets see, there are approx 110 riders, and I am #80... The Xilinx course was fast, really fast, and the start was narrow, so heading inot the woods on the first lap, I was in, oh about 80th position. But I went to work try to move up, and as I went through the last hairpin before the finishing straight, I heard the leaders being clalled through the finish and into turn one, which was several hundred meters down track from where I was.

Pressing on, I kept picking them off, but I had no idea where I was. Nat Ross had his PA cranking out there and lap after lap kept calling my number as I went through the woods, firing people up on the fact I was doing this on my single speed 'cross bike and the crowds cheered me on by name and as the single speeder. With about three laps to go, I cramped really bad in my side and gut, making it virtually impossible to breathe, let alone keep the pace up. A couple of riders I had passed, slipped back by as I sloed up until the pains subsided. With one lap to go, I made a last lap surge to try to catch one more person, knowing that the top 20 get called up the next day, I was 25th. Afterwards I vented to Sandi and friend about how I felt like I was hung out there on the road sections where the geared set were clearly faster but would not pull through, and of course my cramps. I was frustrated. I was very happy for Tim to have won, and knew he would fair well as he had good form coming into this weekend.

After a good nights rest, and a calmer morning, I had a bit more inner-peace, knowing it would be difficult to start from my 78th position on the day, and make into the top 20, but I was going to make a go of it. From the start, I had a better shot up the long, wide pave' hill into the keyhole around the top of the course, where my good friend Dan @ Mavic pinted an outside line out to me earlier requiring a bunny-hop over the curb on the grass, and it worked passing a number of unexpecting racers. Then there was a crash going through the off-camber chicane. I made it around the strewn bodies, and then came another pile up in the next hairpin. Once again I was clear. The lead 30 riders had a gap on our group which I was leading the charge of, and soon I was in-between theg roups, making the leap over. A lap or two later, I saw a familiar green skinsuit,Tim was moving backwards. I gave a quick pat on the hip, and motioned for him to jump on. We picked off a couple other riders getting him moving in the irght direction again, and eventually formed a small chase group. Tim, the other riders & I took pulls, as the announcers gave the play-by-play of Tim & I giving chace. Eventually Tim had a small accelleration and I sat up, letting the other chase if they could. They did, I followed them back to Tim and we were all back together. I felt really comfortable on this course in comparrison to the day prior, smooth and fast, I was in a zone. Knowing I was the strongest in the group on the steep grassy climb, on the next to last lap, I went for it. Attacking the climb, they others were quickly dropped with Tim returning the gesture of not working to bring me back, and I rode away. Hearing the bell, I never let up for the round until the finish, 20th place. While this was not a big improvement on the day prior, I found resolve in this result, because despite the challenges, I rode a strong, intelligent race, not letting any negative energy creep in. While on paper a 25th and 20th were not what I was looking for, I am none the less stoked on my rides, and had a blast taken part in these events. Afterwards, Dave & Richard Vries gave me an honorary "Most Aggressive" ride having came through the pack to get a top 20 over the PA, which was also gratifying.

There were a lot of sweet IF's floating around over the weekend, but I don't think many more bikes garnered more attention than mine. People were constantly commenting on it, asking questions and taking photos of it. I have to say, I am very gratefull I get to ride it, and love how it performs!

Next time, I will take part in more races prior to one of these USGP's, and pre-register for a better starting position, still holding the belief I can and will run up front at one of these races. Until then, there is always next weekend in Durango.
Posted by 34x18 at 8:17 AM 64 comments: 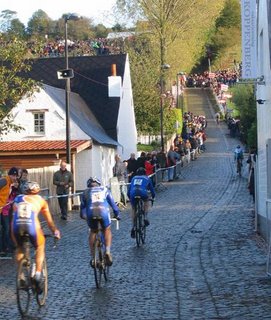 If you haven't checked out the coverage on the Koppenberg Cyclo-Cross, typ in www.cyclocrossworld.com or www.cyclingnews.com after reading my post for some great reports and photos. Having raced mtb's in that region, my heart bleeds to have been there, it looks like it was an awesome venue and race! That is one thing I miss over here, the slimy, muddy technical course of Europe, sure we get them once and a while, and those have been my favorite races - I am think Mt Saint Anne this year... Yummy. The bonus at this cross race was they rode up the same climb as in the spring classic, how cool is that!?!

Had a massage this week, slowed up my legs though, they are great for recovery, but I always feel so sluggish for a few days following, I hope that I have blown my legs back open for this weekends USGP's in the front range. If my form means anything, I am looking for some solid results, trying to get my single speed up on the podium, but I am sure there are quite a few other riders with the same idea. Damn, wish I had one of those Euro courses right now...
Posted by 34x18 at 4:04 PM No comments: