Chris Sheppard coined the phrase in one of his training articles that appeared in Mountain Bike Magazine. A coffee ride is when you go for an easy spin around some local trails and end up at a local coffee shop/ café for a good cup of joe. My old buddy DG used to pull this one back in the day when I lived in Germany the first time around, but instead of a café it was a gas station and instead of coffee it was red Bull... 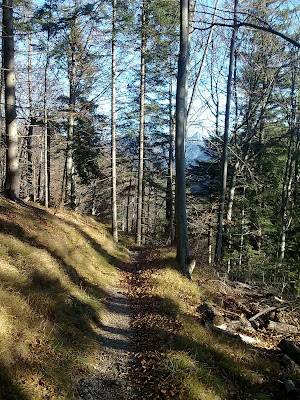 After two harder days this week, the legs were asking for something on the lighter side, but the grey matter wanted something fun, besides we have been enjoying super late fall weather via the "fern". Fern is German for hairdryer or warm wind, and that is exactly what we have. The warm air comes pouring over the Alps from Italy making for sunny warm days, we had nearly 70F today! 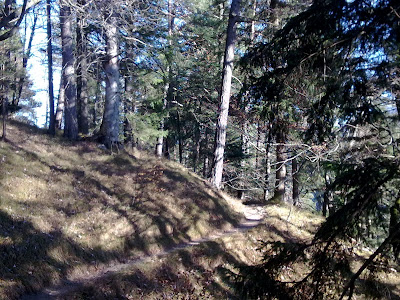 On the riding menu today was the locals loop which includes a spin out to the Alatsee, climb up to the Kolberweg, a sweet techy single track, and back into Füssen. I ended up making two rounds as I thought I had lost some money on the trail, but instead of stuffing it into my rear pocket, it ended up somewhere down my bibs... 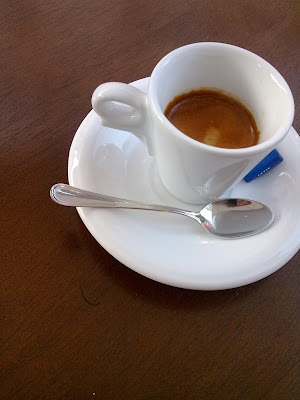 Back in town I rolled the Fußgangerzone in the Altstadt over the cobbles. Füssen is actually a very scenic old town surrounded by spectacular castles and town wall. We are looking forward to the Advent Zeit (Christmas time and markets) here and they have already put up the Weihnachtsbaum. 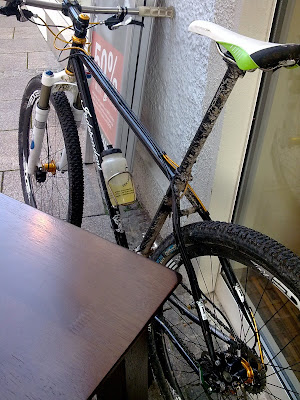 29er squeezed in at the café

The rest of the week and weekend should be this nice as well. Darn it, I guess I will have to keep on riding... 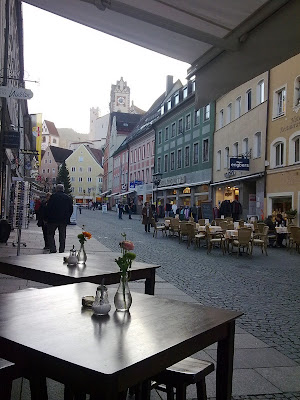 Füssen Altstadt loking up toward the Schloß. Notice the Christmas tree is up already, top left corner of the picture?
Posted by 34x18 at 7:22 AM No comments:

Ralph Berner(former top MTB World Cup racer) and his brother Timo have made a name for themselves in cyclocross here in Germany both through racing and product design. They design and offer carbon cross frames, but also have an interesting line of side products in addition. Some of these products include aftermarket carbon pulley cages for derailuers that they will install, and even have an 'areo' version for the road. They also have cross brakes, touted as the lightest on the market, but one of the neat little trinkets I found was this carbon cable hangar. 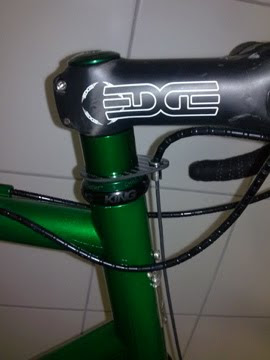 What is cool about this part is not that it is carbon, but rather how it works. The carbon plate flexes under braking aiding in preventing fork stutter, you know that sometimes violent shudder under heavy braking? One German magazine tested the hangar and reported that it increases braking power. While I believ with properly tuned brakes you can have both power and no fork-shudder, this is still a neat little part. It is light weight and looks trick. 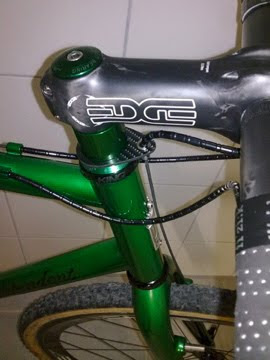 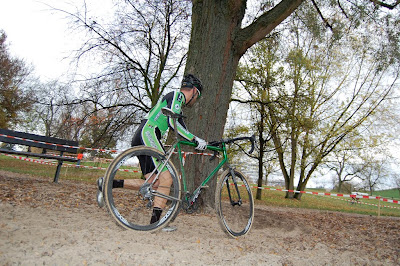 still chasing the dream
I used to have a saying in my profile on this blog, it read something like "If you write it down, post it on the wall and read it everyday, it will come true," it is something I really believe in. Self-confidence can go along ways, sometimes all the way, in making the difference. There were poinent times in my life where I was sure of myself and my abilities, at those moments little if anything could have stopped me accomplishing my goals. That goes for all facets of my life, not just racing.

The writing is on the wall and I am already on my way along my next journey to the top.
Posted by 34x18 at 10:07 AM No comments:

if there were ever 'ideal' cross weather, that is what the conditions were today in Karlsruhe. Cold, damp so moist air that you could almost cut it with a knife, with weeks worth of precipitation softening up the ground. The venue was awesome with a big hill in the middle where one could spectate the whole race from the single vantage point. The course had power sections, up and down and many other varibles with little place to rest. The sand pit was some of the deepest heaviest sand I have ever encountered, wreaking havoc on many.

After a way cool ride on trails with Big Wheel brothers Michael and Justin in the Pfalz the day before, we met up with Basti, Holger and some others for 40 mins of doing circles on grass. I pre-rode with Holger and I have to say his techniques for 'surfing' his singloe fixed cross bike was very impressive - too bad there were no points for style, Holger would have won with those skids and white Sidi's...

Not sure what to expect from the 30+ field, Justin and myself took up spots in the 2nd row. Waiting for your typical sprint at the start, the slow roll off took me be surprise, so I quickly nabbed the hole-shot and ran with it. Not punching too hard, I still strung the field out and quickly made a selection of three riders off the front.

But it felt like I was missing just a tick of speed and could not quite dig in all the way. So one slipped by and rode away. My brakes sucked and I rode timid to put it nicely on the descents, kind of bummed I did not go for it more in the early going. As the race progressed so did my confidence, able later in the going to take faster more aggressive lines.

The third guy wanted my spot, and even took it for half of a lap, but a bobble in the sand trap and I had it back and from there opened the gap. Late in the race I caught Michael to put him down a lap, but he slugged it out. His converted road Schwinn Paramount looked pretty cool, but probably was serving him well on the very slick, steep off-camber sections doted around the course.

A mechanical took Holger out, or so he claims... Justin wasn't that far behind me in the end, something like 6th or 8th. Good race, lots of fun. It will be one we come back to for sure. Next weekend: Rosenheim.
Posted by 34x18 at 11:46 AM 2 comments:

we drove up from Bayern today to the Pfalz, the weather is pretty much late fall all across the fatherland right now...cold and wt! We had snow back in our forecast the last few days but still had some great rides in Hopfen.

Sandi & I spun around the villages around her hometown, sandstone famrhouses with red ivy pitted against a grey skyed backdrop provided some cool scenes during our ride. Looking forward to FINALLY racing again, seems like ages since Oberstdorf... Normally this time in the season we have quite a few CX races in the skinsuits and are thinking of off season. This year it seems I am just getting going and the party is already over... Still, we will get our licks in and then get on the nordic skis for some solid off-season training and prep for 2010. We have a very cool group forming for the IF Euro Grassroots program - stay tuned!
Posted by 34x18 at 12:29 PM No comments: