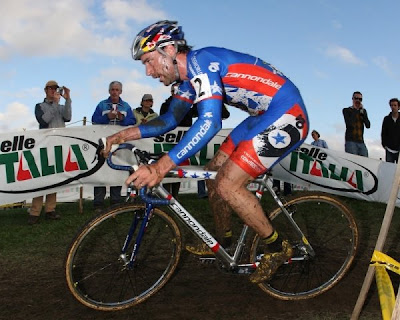 Your Name here.
They call cyclocross the NASCAR of cycling with its fast pace, some rubing and the fact that we go around in tight circles. While I don't entirely agree with annology, Tim Johnson is not helping the cause. Recently he has been showing up to cross events with a Red Bull helmet, the ultimate sellout. I wonder if he actually drinks that crap?

I realize he is not the only one plastered with logos, and actually his 'Nine-Ball' kits are pretty sweet. Not too mention Tim is an awesome guy, and I am all for a starving cyclist to make a decent income, but Red Bull? Besides, I thought they only sponsored anti-skinsuit wearing, gated-racing, non-pedaling huckers?
Posted by 34x18 at 11:31 PM 8 comments: 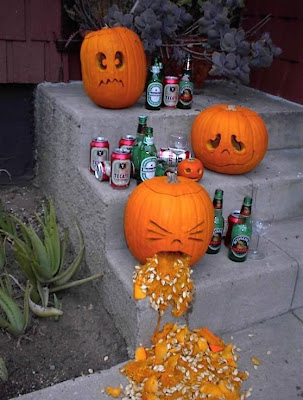 Over the weekend, Colin, Sandi & I went to Mannheim (which via the Autobahn is less than half an hour away) for the Iron Cross Days cyclocross race. Unlike the Iron Cross know in the states, this was just a 1.5km course, that could have been much batter than it was. With the start and finish on the local velodrom, we would cross over the tunnel at the north end riding towards the first dismount. 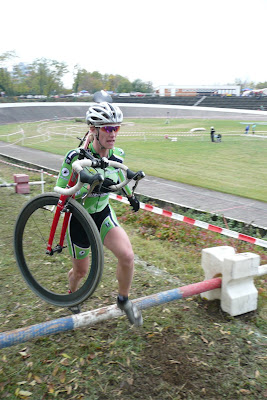 Sandi floating over the transitions

The slight uphill had three barriers on it, with just enough grade, combined with the water soaked groud, there was no means of bunny hopping these. Which was fine, it made for a nice long run up. After remounted on top, it was almost a full lap arond the outside of the velodrome before pealing off towards an appartment/ park area. Here is where the course wa a bit scetchy. A barrier on otp of three flights of stairs that we ran down! If it had been at all any more wet, it would have been way more dangerous than it was, and probably would have seen some torn ACL's if not worse injuries. As it was, my ankles and kness still hurt from hitting the concrete at speed and running down cobbled steps. 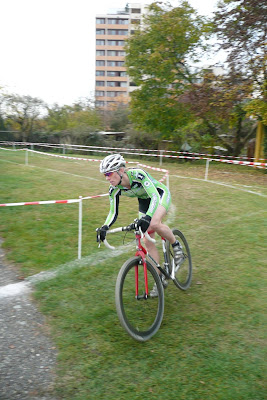 Sandi was her competition

Through a sidewalk passage, it was around a sweeping grassy bend with an uphill at the end heading back towards the velo-club grounds. Around the club house, across the north end perimeter of the velodrome, and a tight switchback before dropping down through the tunnel and into the track. 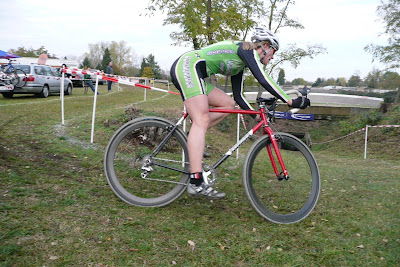 Sandi railing the hairpin
I went off first, racing the open men’s race against 17 others. Normally you can count on some crazy fast Euro’s at small events like this. My first years of racing were spent over here in the ‘hobby’ class getting my ass kicked. That was not the case on Saturday. Grabbing the hole-shot, I wanted to hit the first run-up near the front after having watched several of these guys stumble through the transitions. Clear of the others, I remounted at the top to find myself with a gap, but was still expecting a counter attack from behind. Semi-soft pedaling I glanced back to find no one was chasing, so I punched it. 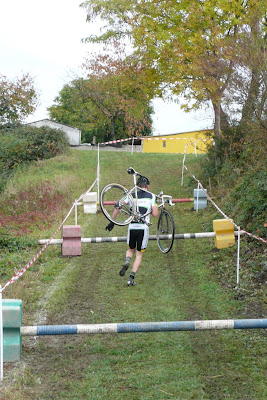 On the run up

After my acceleration, I would only see the others as I started to lap the field. I was still on the gas for most of the race, not 100% but still getting my monies worth. After a dizzying 10 laps and 40mins of racing, I had lapped up to 3rd place and probably could have ran the last lap and still have won. My lap times were around 3:40 to give you an idea of how short the course was.

The best part came taking Colin up on the podium with me, which he loved the people clapping and joined in. He liked the shiny prizes and awards too I think. 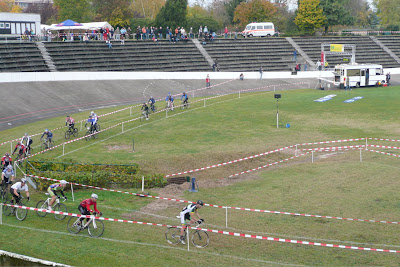 The track in Mannheim

Sandi’s race lacked competition, well almost. One poor junior girl got lapped two times and Sandi was always on the heels of the lead junior men, much to their disliking… She too made her own workout of it, pushing hard through the entire race. She was really surprised how quickly the dismounts and remounts came back to her (as was I for myself). 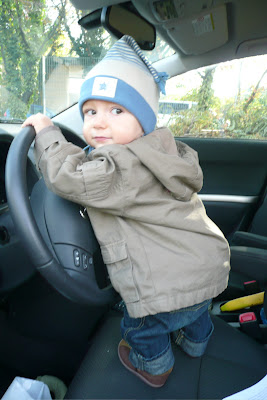 Taking over the wheel

The great thing about small events like this one are the people you meet, other who share your own passion for the sport. We met a few different people, talked about bikes, kids and organizing events. No matter where you go in the world the cycling community is an extended family
Posted by 34x18 at 12:02 PM 4 comments: