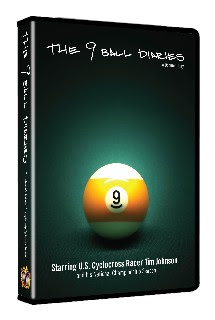 Put this one on your wish list. Timmy-J getting some, check Wells out in the trailer showing Page where the line is...rubbing is racing! 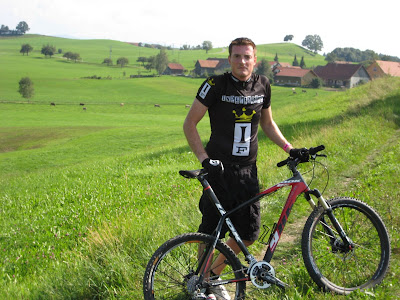 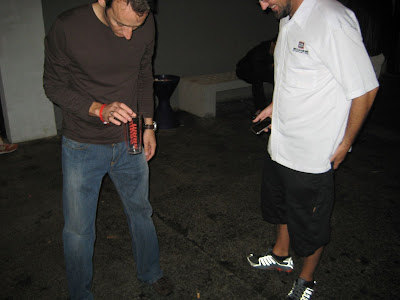 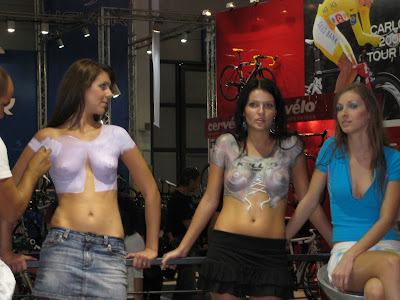 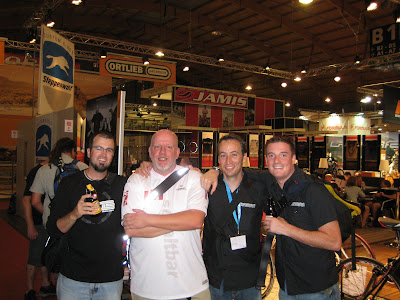 I’ve got to wrap this up, I mean EuroBike is so like tow weeks ago, maybe more???

The final two days were much like the first two, watching the chaos of the main halls from a far while core-fans and enthusiasts sought us out. This was especially true on the public day, Sunday. Fans from all over Europe passed through our booth for a gander at the quiver on hand. The EDGE wheels also had a draw over the course of the week, and I see big things on the horizon for them as well.

Afterhours. Joe & I took full advantage of our fellow industry insiders hospitality, munching and chugging down whatever tasty delights they had on hand, actually it was more of the chugging variety. Jason Schiers from EDGE joined in the final two evenings that included a proper introduction to Phaty, a guy you have to cross paths with sometime in your life. Put it this way, if Dejay Birtch says keep your eye out for him, that is saying something. Phaty is the mastermind behind SiS and a rude obnoxious SOB, but still likable and warm as your old childhood teddybear. Having Phaty tell it how it is to Joe and Jason was not only enjoyable, but down right entertaining.

We knocked back some beers at the Conti booth before rolling out trying to find the Metro, no not the train, but the club as in rider party. Typical Americans, we were way too early, so we rolled in to a café/ bistro, unfortunately for us, they had stopped selling food, we were in semi-drunk limbo. After sweet talking the waitress a little, some badly burnt pizzas that were still not cooked on top were served to us, hey all of the food at tradeshows sucks. After a couple of brews, and some really bad pizza, it was back to the Metro. What was once empty was now pulsating with techno beats and a line way out the door. Little patience and pretty tired, we packed it up for the evening.

The last evening kicked off with the SRAM party, or should I say SCAM party… The one thing about being associated with IF is everyone has a story to tell you, and you are instantly their friend. I tried pimping a couple of passes for the festivities from a reluctant Dirk Belling and his kronnies, even in rejection we had an Ace up our sleeve. Two party goers spotted Joe’s IF tee and chatted us up talking about Fat and all. Moments later the lovely madel in the group was wrapping a get in free pass around my wrist, and the thug at the door let all three of us in as soon as I mentioned IF.

Joe greased the wheels at the massive beer line and we were off. Since it was raining, festivities were contained in a small side room and under the umbrellas from the beer and food stands. After a couple mugs of suds, we were looking for some different action. On our way out the door, Joe won an improve game of ‘cups’. Dropping your plastic beer cup from chest-high into a cup sitting on the ground.

This time we made it to the Metro, and the rest of the night became a blur. RedBull Vodka and a mosh pit can erase your memory pretty quickly. Joe got his picture taken on the way home courtesy of one of Germany’s many roadside radar-photobooths, can’t wait to see how that one turns out, or how fast he was going.

Joe & Jason flew back on Sunday leaving me to fend off the masses of public day on my own. The day went smoothly as it could and by the end I had no business card, postcards, catalogues, sticker, you name, it was gone. Not too mention the box of tools, a reto-Fat tee a friend gave me during the show, some tires and saddles someone walked off with. Karma will get them.

EuroBike was an excellent experience for us, and IF. We grew a lot during the show, and have some great opportunities that lay before, albeit some challenges too. But most of all I appreciated the love we received from so many. It was always surprising to me how many people knew IF, the story and appreciated the work. Passion sums it up pretty well. Something not many other people at EuroBike could boast.
Posted by 34x18 at 11:17 PM No comments: 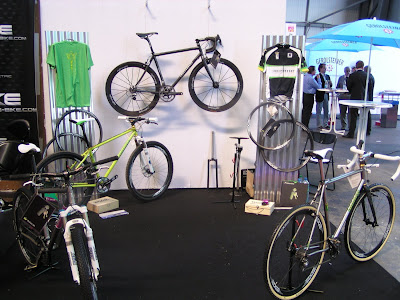 With little time for a proper follow-up on my Blog, forget even trying to write something during the show!, I have been surfing the coverage from the show on various sites around the net. If you were to follow what the main websites (VeloNews, Cyclingnews…) and many of of the smaller guys are reporting, you would think the show was about more carbon light bikes, new grouppos from S,S&C and bikes from pros, particularly the Olympians (as it seemed everyone was showing an Olympic bike, even if they were off the podium. For the most part, you would be correct, however there was also a riptide in the halls that the media and internet did not register.

Steel – Ti bikes, especially of the handmade sort are back. Maybe as a exhibitor for IF I am looking through a bubble, but if you looked closer at the show, there were sweet bikes all over the place. Our ‘official’ friends at Fixie Inc. were sort of leading the charge, taking 3 Eurobike awards for their creations. Seven, Lynsky, Serotta, Baum and a plethora of other small European builders all had representation at the show. Then there was IF.

Relegated to the Zeppelin Hall (you have to do the ZH proving your worth before getting into the big time show in one of the main halls – look out in 2009!), we had 5 beautiful creation packed into a 10x10’ space. I had planned on a bit more for the show space, but after several plans and using my uncle’s terrace over here as a reference (being it was the same size), I went simple, black carpet and two corrugated metal walls to frame the stand. Joe Ingram from IF flew over to help out, and we ended up testing our wall papering skills last minute as the section of wall behind us was not finished – way ghetto.

Demo Day kicked things off, Joe and I delivered some rides to Hutchinson, and they sent out my ti 26’er and Achim’s 29’er – to the delight of many riders. One guy had the 29er for a long time riding around with perma-grin (he would stop by the booth during the show and is wanting a 29er now). I ran into Elyana from FOX, it is always great to see her and she has one of the best jobs around hitting some fun events. After cutting the steerer on my new 29er, we walked the demo day with our two new IF’s which drew a lot of attention from the show goers. We threw the bikes back in the van, and went out on some bikes for our own demo day. We tried Focus (Mike Kluge’s band) and Look, neither were impressive. I just can’t wrap my arms around carbon bikes, particularly the off-road set.

After baking in the sun all day, we made our way back to the show, and tidied up our booth for the first day. Staying 45min away from the show kind of sucked, especially for the post-show daily social hours…

Day one: Suprisingly, it was very busy out of the box, well for ZH parameters. Little did we know of the craziness in the main halls. The good news was is that media previewed us for the show and people sought us out in the Eurobike Guide. We also had bikes in a couple of other booths. The first three days were for the dealers, the last for the public. As I have tried to focus on direct sales, I was surprised that so many dealers were looking and finding us. I spent a lot of time talking about the bikes and EDGE who we are also distributing over here.

Our booth had my new lime green 29er, Phaty’s YoEddy inspired single speed, my SSX, Sandi’s Ti Deluxe and a Sweet XS from IF. AS people rolled through, they would study the workmanship and details, combing over the bikes in awe. Catalogues, business cards and price lists were flying out the door. I also took two orders the first day from big IF fans. Following day one, we rolled over to the Mavic stand for a happy hour, too bad my friend Dan Crean did not make it over, but we stilled enjoyed some good wine and appetizers. 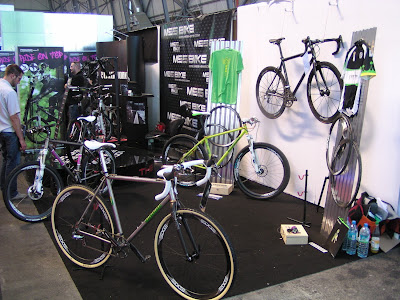 Day two was more of the same, busy. Actually besides the public day, it was our busiest. Jason from EDGE stopped by and was checking out our stand. It was great to meet with him and talk about new products, and projects for the future… Besdie our stand was a café with standing tables, it became our parcours for demoing my two-niner. IF cranked out an amazing ride that turns on a dime – but more on that in another post… Once again we had dealers requesting catalogues and pricelists, lots of IF love was being spread around. Funny thing was, people would stop by and would be back later. Time and time again I heard how great it was that IF is in Germany and Europe. Someone even gave me an old Fat City Cycles YoEddy T, only to be stolen out of our booth (along with tires, a saddle, and other items…)