Two times round the clock in Munich

We were off to Munich for the weekend for the 24hours in Munich. Sandi was playing guest heavy-hitter on the Team Zyprus squad, while some IF family members, Henri Lesewitz & Michael Vieth, were waving the green-team colors high. My own ti 29 went to one of their team riders Toby for the race.

The venue in the Munich Olympic Park was pretty sweet with a cozy atmosphere with all of the team around the edge of the course on the stadium. The course was less a mountainbike course and more cyclocross, so much so there was even a 'run-up'. Probably a good reason why there so many 29er rolling around the course - but too bad not a cross bike. Seeds of holding a crss race there were sewn in my head and will have to be pursued...

It was great to see Basti & Kay out there at the venue. Kay shot some great pics from our rides at EHBE. They were on hand doing some work for Fahrstil shooting pics and checking out the scene.

Our Buddy Michael who lives in Munich swung by to hang out and afterwards took me for a quick ride through the city. Thomas & Burkhard form Waridi were on hand to illuminate things

It was great see everyone out there, catch up on things and to see all of the racing action. 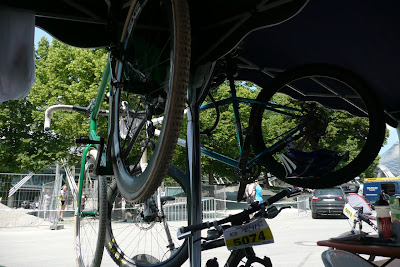 IF
IF's hanging in the pits 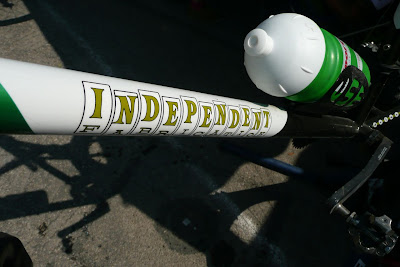 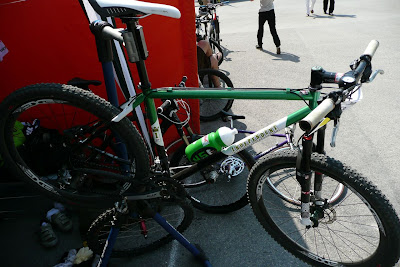 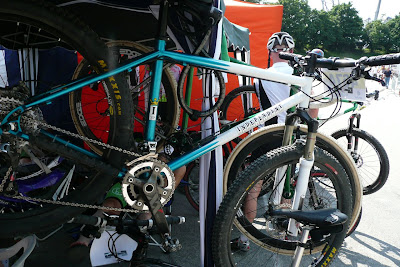 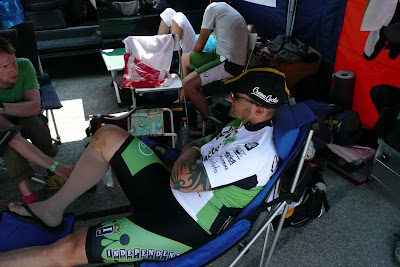 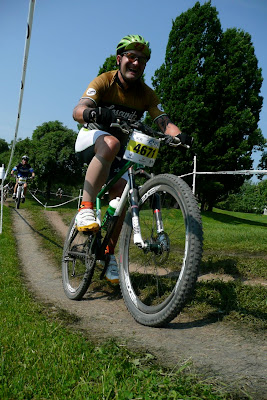 Henri rolling around the Olympic park in Munich 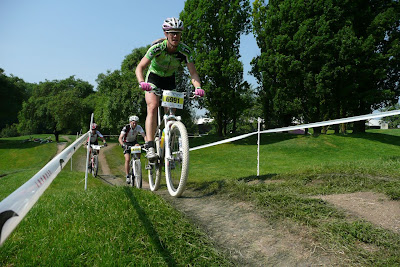 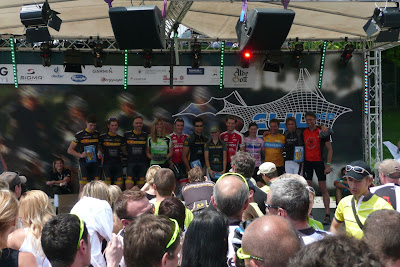 we have started representing embrocation cycling journal over here, which has been an instant fovorite among the euro cycling crowd. who doesn't like it big beautiful pages of cycling goodness. it is the perfect cycling scratching post for the mind. we made it onto their news pages, sporting their cranberry mokka pot tee while appropriately pulling shots at the EHBE show back in May. we have some very cool projects coming up with embro, to include next week's Critical Dirt cyclocross love festival. 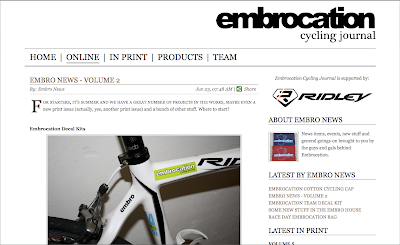 we just delivered Flo's escape from the city Ti Planet X 29er, which was awesome to put together with him. This do it all ride will be seeing a lot of action in and around the mountains surrounding Innsbruck. He's as stoked as we. Enjoy the ride Flo!
Posted by 34x18 at 4:24 AM No comments:

The new UCI rule allowing disc-brakes will surely be a polarizing one, it was before it even came into effect. Those wanting to keep the sport pure were already screaming to keep 'technology' out in favor of traditional rides while others were cheering for discs to aid in riding/ braking performance.

From a traditionalists perspective, I see the need to keep the bikes pure and the riding in the hands of the racers. For me, one of the draws to cyclocross was & is the renaissance of cycling lives in breathes in the sport, where beautiful steel and ti bikes can be seen in droves on any given race weekend. Not too mention that some of the most re-known handmade builders flagship frames are cross steeds. The cross bike still looks much the same as it has since its inception complete with drop bars and skinny tires. Tubulars have seen a resurgence in popularity due to the sport, a market segment that was on the verge of disappearing, with the exception of road teams who could afford to service tubulars. I myself love tubulars as the evidence would point out on some of my favorite t-shirts with additional glue-graffiti on them from fixing or re-gluing my Dugasts. Discbrakes will not change any of this.

Personally I think beer-can and plastic bikes have done more damage to the sport that disc brakes will ever do. Downright ugly, cheap looking frames have amateurs clamoring to throw money out the window merely so that they can mimic  top pros with their light-weight disposable bikes. I would rather be on a sweet steel crosser with discs that will last me a lifetime of mud-loving fun than the latest carbon bike out of China with its integrated headset, bb & seatpost. It is not carbon bikes that have done this, there are some actually stunning handmade carbon cross bikes out there, it is the paper companies and their business practices. Besides, I love my EDGE carbon wheels and other trick carbon parts on my trusty SSX.

What the lifting of the ban for cross bikes does do is open the door for both bike and component manufactures to produce disc brake compatible frames, forks and parts.  While there was a small selection before, we will now see the options filling out with both mechanical and hydraulic versions in all price and performance segments. The one issue I see though is unlike its fat tire cousin mountainbiking, crossers use largely STI dedicated shifters and levers, which means more than likely this will leave most disc brake manufactures on the outside like Formula, Magura, Hayes and so on. Their will be a Shimano or Sram only systems available unless the brake guys figure some things out. Having ridden the Avid mechanical discs on a crosser, I am excited at what lies ahead. I am sure Avid will have a bitchin new mechanical black-ops/ Ultimate disc brake caliper, and you can bet your bottom dollar Tim Johnson and Co. will be on them at a cross race near you later this season.

Funny thing about the new UCI rules are that at the same time disc brakes are allowed, they also bring down the allowable tire width from 35 to 33c, which plays even more in favor of the disc brake rule. Take away handling performance from the tires by reducing the contact patch and volume, disc brakes compensate for this loss with added stopping power making handling somewhat easier.

Ultimately the disc brake rule is good for the sport on many levels. It opens the door for much better braking with little weight penalty, and when viewed with the tire regulations keeps cross, cross. It will breed a whole new segment of bikes that are actually ideal for a large portion of the cycling population out there, while pushing component manufactures to produce real road/ cross compatible disc brake options.

To keep cyclocross pure, it is up to the promoters and course designers from either making grass crits or too technical courses where mtbs/ suspension come into questions. Courses should be an excellent balance of speed, riding skills and obstacles that tip their hat to a cyclocross bicycle. It will be interesting to see how the companies answer the call to the new regulations, and I myself am looking forward to see what will be on display from some of the finest handbuilt bikes next spring in Austin.
Posted by 34x18 at 8:16 AM 2 comments: 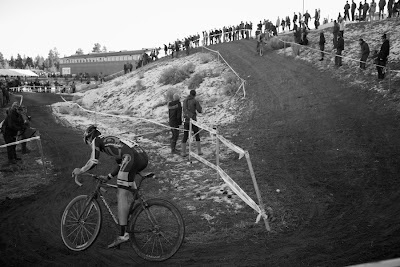 Other 'cross rules changed by Management Committee
The UCI will allow disc brakes on in cyclo-cross races effective at the beginning of the 2010-2011 'cross season. The organization's management committee approved the change upon the recommendation of its Cyclo-cross Commission.
At the same time, other changes to 'cross rules were approved. The maximum tire width has been reduced from 35mm to 33mm.
The six-obstacle limit on courses has been changed to refer to man-made obstacles. The plank-type obstacles can be up to 40cm tall instead of having to be 40cm tall, and they must be four to six meters apart.
Man-made sand pits are also now allowed and feeding will also be permitted if temperatures exceed 20 degrees Celsius; however, the feeding is limited to pits and can happen only after the first two laps but before the last two laps.
Similarly to mountain biking, commissaires may now invoke the "80 percent rule" and remove a rider who is behind the leader by 80 percent of the leader's lap time. Thus, riders can be pulled before they are lapped.

The CremaCycles site is up, finally. we still have some tweaking to do, but it is live. Come on over and check it out, we have Independent Fabrication, embrocation journal, soft goodness, coffee, Mule Bars and much more. Give it a spin and let us know what you think. 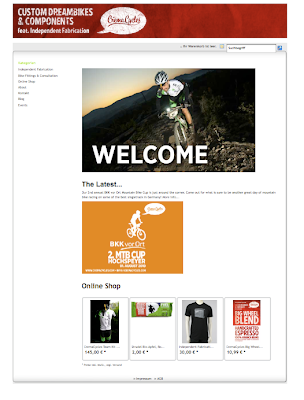 Here are some digital images from the weekend. Still on the road this week, scouting and doing some work on the XC course for our mountain bike race on the 01.08. Should be a great race and a sweet course. Adding some switchback to the climb on the backside of the course that forced most to walk - but hey it's mountain biking right? The Singletrail Parcours is shaping up very nicely, even saw a number of kids taking their bike up and down the trails while out for a ride yesterday with Sandi. Great to see the positive impact on young people and getting them out there riding, we need more of this in the world! Which BTW - we offer free entries to all of our youth riders! Get 'em hooked young.

Next stop, Willingen & the BIKE Festival. Hope to go have dinner with a friend from Gunni, Joe Staub one evening. Sandi will be lining up for the Marathon on Saturday. 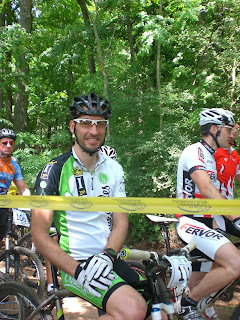 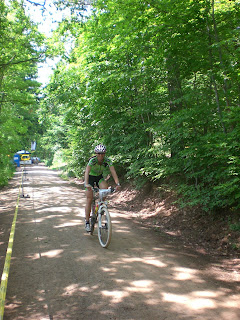 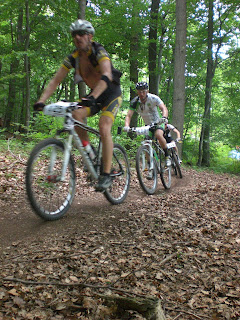 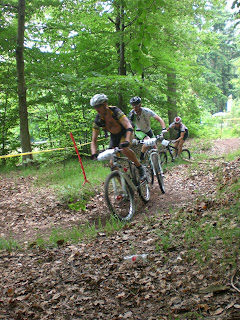 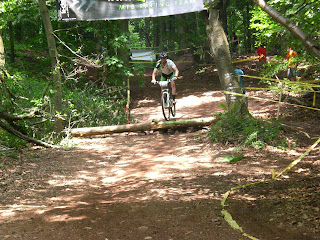 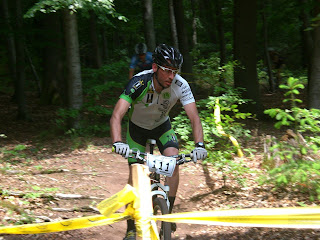 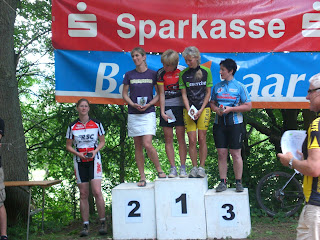 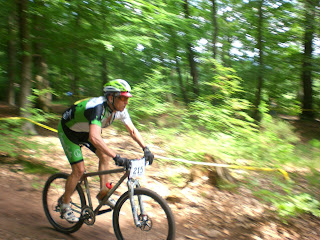 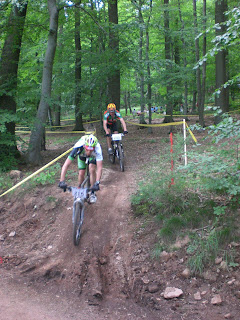 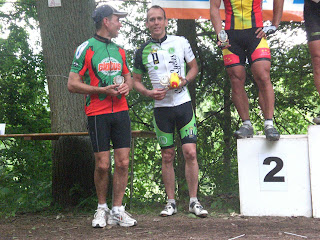 Just tossed a post up over on the IFBRT site. Kudos to Sandi & Wolfgang for doing well representing the CremaCycles/ Independent Fabrication banner out there in Niederlinxweiler 2day!