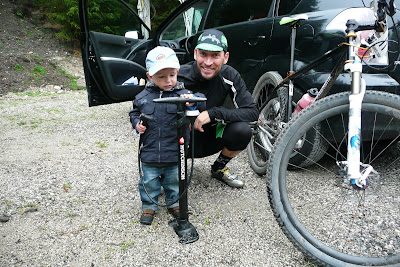 The C-Man and me 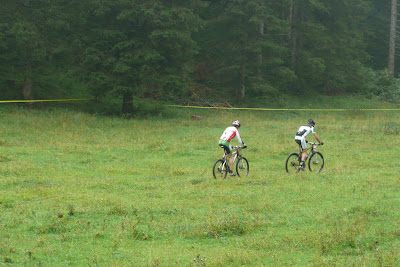 Me leadingthem through the wiesen 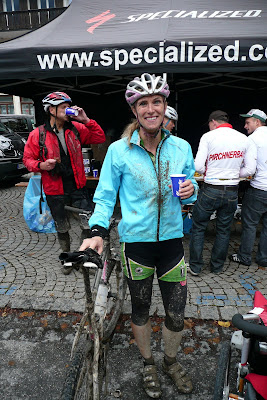 Sandi post race w/ splatter
Back in the day, Garmisch was the highlight of sorts of the season, but then again I hadn't been exposed to Colorado racing yet... But none the less, I was looking forward to this one, racing on some old turf in perfect conditions, wet, cold and sloppy. Like in the old days, there were some fast Germans on hand led by Marathon maverick Andi Stroebl. The field was about 50/50 with US military guys towing the line with some ueber-trained locals, and like in years past, local nation was out front quick. Vying for Andi's wheel were myself and about five others, a little twist of the throttle on my behalf and I had his wheel and the line. Andi and his Teammate led out the first lap and would slowly pull away throughout the race, we were left fighting for the scrpas and podiums. After a bobble from Justin Pocca, Big Wheel team rider, I had a grip on third for the middle sector of the race, leaving Justin to fight off some locals. But in the latter, one guy picked me up and dropped me, while Justin was quickly reversing his deficit to me. With one to go I kept the gas on just enought to keep Justin at bay and preserve my fourth overall and second in the Masters (first American and 29er - right Justin ;P). This was a fun course, no difficult and more like a cyclocross including two run-ups per lap...hopefully Rapha will send my cross bike soon so i can break here in.

Sandi took over on riding duties on Sunday, piloting her way into the mtb marathon scene over here by doing the Oberammergau Mountainbike Marathon. There is a complete seris on along the Alps that inlcudes an early season stop in Grand Canaria for all of the ueber-athletes. Riding the middle distance, there was still over 50km and 1600hm on the menu for here and some fast chicas. Sandi rode quickly to the front at the start opening what would be over a 5 min lead by mid-way. But she would be denied after fading in the latter half, barely getting nipped out for the overall buy a mere two minutes, and would have to settle for second. Still estactic as she should be, she was stoked to be racing and was all smiles afterwards. That was until the totally f-ed up the results leaving us to protest and straighten out the results. which they did fix but here is the kicker, we had to go to the start finish to get things sorted, and then walk 5 min back to the awards and when we got back, they had already done hers. Then the organizers tried to give her a cheap jacket as the prize when in reality she had won money! Fortunately we got that fixed as well.

We were both stoked to be racing once again and are looking forward to more, up next for me is the Oberstdorf Marathon on the 26th and then Sandi is competing in our own Crossduathlon (www.crossracer.eu) on the 04, Oktober.
Posted by 34x18 at 10:28 AM 2 comments: 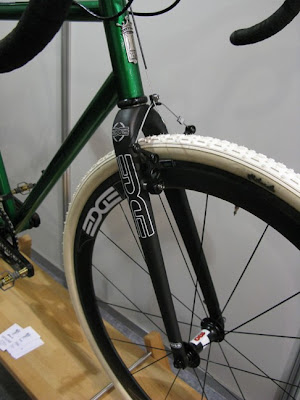 some sick custom IF Dugasts 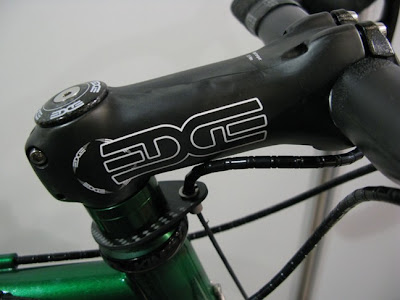 slick cable hanger from Berner Bikes, it is suppose to stop fork chatter from braking 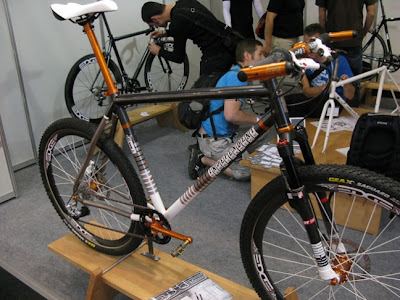 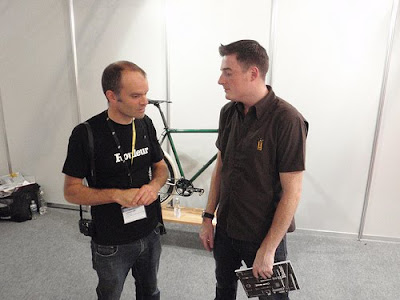 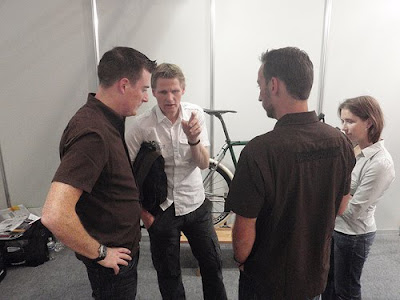 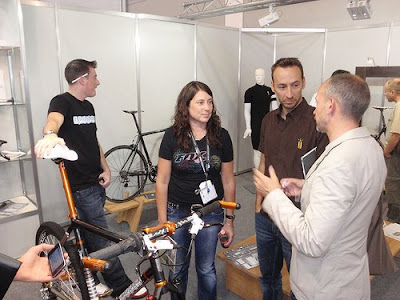 Another year, another EuroBike, well almost... This EB for us was awesome. Thanks to economic stimulus from EDGE and IF we ended up in a sweet booth in one of the first halls at the show, the only downer was we were not in the official guide. The booth features two freshly minted Corvid's courtesy of Kevin at IF and Kevin from EDGE. My newly dressed SSX and Joe's Ti Deluxe (which was the real draw adorned in Tune bits - German's like that sort of thing...) rounded out our custom bike palette. The icing on the cake was my, I mean er, Michael's SSR out front at the main entrance as part of the EuroBike Award display having taken home the award for "Best Frame".

Too much happened during the show to comb through it all here, but our booth had all of the major media roll though, bikes went all sorts of directions following the show for photo shoots and articles and there are a few more on the horizon. Beside EDGE and IF, we had Rapha in out booth, not too mention some sweet Fixed shirts complete with IF embroidery. Many players rolled through for meetings and visits, FOX, Rapha, Roleur, Dugast and so on... We also had the pleasure of dining with Rob V from Seven and Bob Parlee and many more industry insiders.

The Leipzig crew was once again in full force, Gerolf and Co. kept us company on serveral occasions and we had the chance to make some plans for 2010. While I did not get to see much of the show myself with meetings all of the time I did get to see a few goodies along the way.

We are still playing catch up from the show, but we can say it was a success on all fronts. Just a little more follow up and we will be ready for some cross racing! MTB race this weekend in Garmisch for me and a marathon for Sandi in Oberammergau on Sunday.
Posted by 34x18 at 10:50 AM No comments: