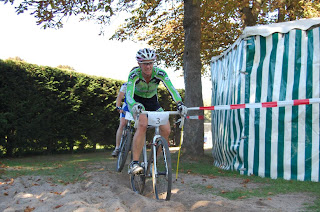 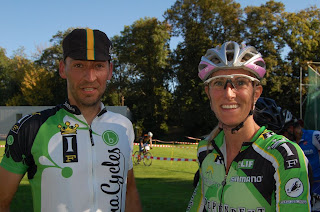 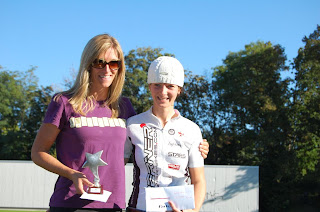 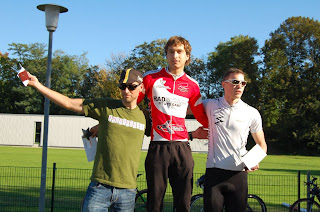 The feet are firmly planted back on European soil, we now have of a week of 'reality' behind us. It was nice to be in Füssen before heading out for our first CX race of the season. My week was spent working with customers on pending orders and attending to the overwhelming positive response from EuroBike. CremaCycles has taken on nice life of its own. I also spent a lot of time looking for a showroom for  Crema, yep that's right, we are taking it up a notch. Full-on showroom, fitting studio & workshop pretty exciting stuff, and more so we will be better able to meet the growing needs of our customers and business.

In between the cracks we did some riding on the cross bikes in some truly nice, very Autumn weather in Öst Allgäu. Moist green fields pitched a beautiful contrast the fall foliage and blue skies. Before the bags were fully unpacked from our nearly month long absence from Füssen, we were packing up again to head to the Pfalz for a week of 'cross.

First up a cross race in Mannheim to open up the legs and to pitch our own cross race the following weekend. Racing for me has taken on a different roll than it did in my previous life as a serious contender. In this life my approach is much more relaxed and is more centered around the experience than the result. Don't get me wrong, I am still a competitor and want to be up front mixing it up, but I am also realistic about what is possible.

With this in mind, I found myself lining up mid-pack after a pre-race potty break. Lucky for me, Sandi was holding a spot for me, otherwise I would have started from way back in the bleachers. My thoughts were already to take it easy early on and just ride my own race, but from where I was starting from, I had no choice. Good friend Stijn Deferm had placed himself properly on the front line, and got the hole-shot in true Stijn form. Sandi & I rolled out together, navigated around an early crash and did not make much headway the first half-a-lap.

Once things got strung out a little, I started to work forward, but at a sustainable pace. The race was happening naturally, those who started too fast were starting to pay for it and fell backwards, and slowly we were moving forwards. By mid way, I found myself in the lead group, minus the leader who was taking a flyer off the front. The few guys I was riding with were going at a good pace, but were making lots of mistakes all around the course and expending lots of unnecessary energy. It was an interesting situation to be in, I knew was was faster, stronger and technically better than the guys around me, but just choose to sit in and let them work. One big trump card I had over all of them, and used every lap was bunny hopping the double barriers just before the start finish, and a single barrier a little later. Without effort I could sit back 5 meters behind the group, and pass all of them on the other side form the barriers. It was a lot of fun to play with them. Then one of the group decided he needed to pass in a tight wet corner, total beginners mistake and his carbon frame meeting the light pole paid the price.

For some reason they did not give a a lap count even though they had a lap counter trackside, so it was just play it smart 'til they rang the bell. On the bell lap we were down to two going for the runner-up spot. I let the other guy lead the charge and had him in total control despite his efforts to put lapped riders between us. Hot on his tail, we hit the last corner and he stopped. I was going by any way and hopped the barriers and sprinted to the line. 2nd place. Andreas Thiel who had briefly stopped and then finished third congratulated me and then commenced to complain he did not know the lap count, which I affirmed nor did I. What I did not know was he protested the results because he did not know the lap count to the organizer and it wasn't until the awards that when I was called up as 3rd did I learn of what went down. Too bad. That is not how you wish a fun day of racing to end. The organizers should have pulled me into the discussion since we were racing together and it had an effect on my placing in the end. And to Andreas I would say know your course, ride the race to then end, take responsibility for your own actions and earn your results on the course. But then again the result doesn't matter - it is the experience. For me it was a fun experience to be the 'senior' out there, having fun schooling the other riders and still learning some lessons myself.
Posted by 34x18 at 1:01 AM 1 comment: