Out of the hole

Coming off my 5th illness for 2010, man this is getting old, we had the monumental task of putting on our 2. Mountainbike XC cup in Hochspeyer. Besides my outlook being the gutter along side my health, we have some obstacles tossed in our way making this year's edition tougher than ever. But none the less we hunkered down and got through it. 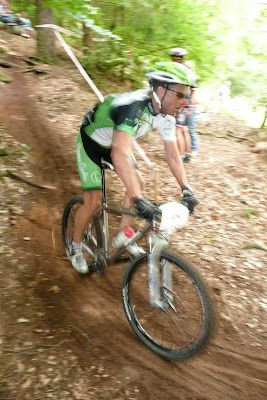 The course this year lost a section of track due to some construction, but there fore we tacked on another and did some trail maintenance in the process making some sections more ridable, but still techy. Fortunately the weather played along, actually it did a lot to make the track nearly perfect with some showers leading up to the race, for a fast tacky track. An ample helping of singletrack, steep descents and a barely ridable ascent were on the menu for our race. 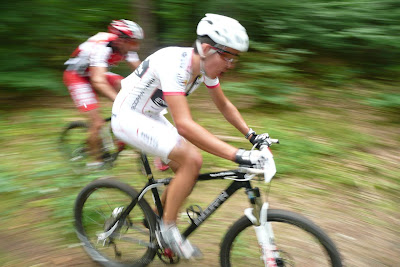 CremaCycles riders David Guillot and Wolfgang Seyfried represented the If faction since Sandi and I were tied down with organizational obligations, although I did plan on racing this year had I not been sick... dang it! Nonetheless, I found soemthing to replace my desire to be out there swapping paint with others, I grabbed the mic and gave the spectators a play by play from the start/ finish area while spinning (more like hitting shuffle on the iPod) my own blend of music. OK, so I wasn't exactly Dave Towle out there, but got into to it, did it in German, had a blast MC'ing and even made the regional papers for my efforts...LOL! 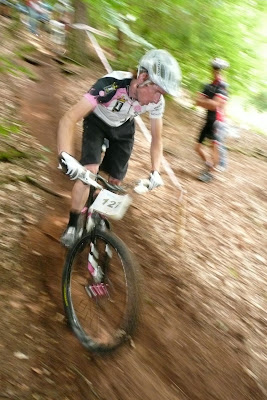 We kicked off the day with a couple of free kids races, go the little guys and girls stoked on riding, the best part was seeing the little guy who won the peewee race jump up on the podium in his 'mountain champion' jersey as if he belonged up there. Tooo funny.

The whole day had some good tight racing and the course challenged all who came to race. But the men's main races were going off! Fast, tactical racing was the order of the day, since I was calling the action, it was great to see some tactics and attacks playing out on the course. What was especially cool was having a guy like David out there rally not only his sick IF Deluxe 29er 4 speed rigid black& pink bike in his pink Crema kit, but the fact he had a blast rallying the DH's around the course. It was too bad I could not stroll down to the down hill to enjoy the spectical with the many who gathered on the interesting parts of the course.

For me it is fun to put on such an event because I love to do races like this. The courses and formats I come up with are exactly the ones I personally would like to do. Hopefully next year I can stay healthy and jump in with the others for our race. Maybe with a wireless remote I can call the race from the on the tack...

Little side note, if you haven't seen the bike we did for Critical Dirt, you need to! It is freaking sick! Bonus: it is all over the blogosphere, here are some links to check out...