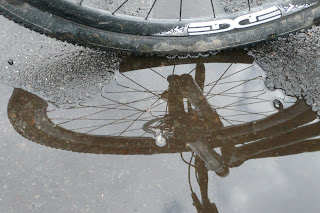 Threatening weather chased me into Leipzig while on my way to our second Feld Test with the BDO crew. Leipzig left a remarkable impression on me from my last visit so I was eager to go back and see the city and some of the people who I know there. Plus this was sort of a prelude to the Critical Dirt coming this summer, so there was lots of business to tend to.

Promptly stretching legs after five hours of road time, we rolled our demo fleet into the shop for a little preview of the rides we brought along for demoing. Guys and gals in the shop flocked around and we all geeked out on bikes for a while. Beer :30 came and went, and GRover and myself were off for a rendezvous with Basti und Colonel Decker and a fin little local establishment with tasty beverages and tappas. 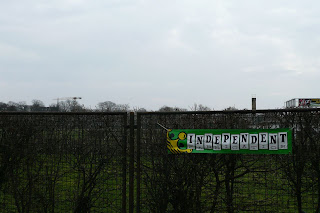 One of the things I love about Leipzig are its buildings around town, possessing a nobel architecture and civility about them, even though some are run down and are in long need of renovations. Something I did not notice during my last visit were the massive granite slabs, each about 40 - 70 cm wide and at least 10-15 cm thick, that make up the sidewalks around town. A testament to past wealth much like the buildings. 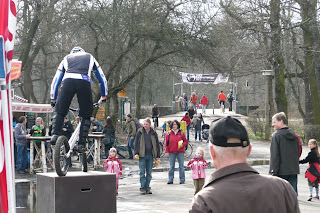 Leipzig seems to be on the cusp of a renaissance, young and talented people are in abundance here despite what one would consider a lack of opportunity. But they are patriotic to their city and are carving their paths to the future. I think that is a reason why I feel such a positive energy emitting from this place located off in the far eastern reached of Germany, that was once in the cold grasps of the former Eastern Block and a silent war. 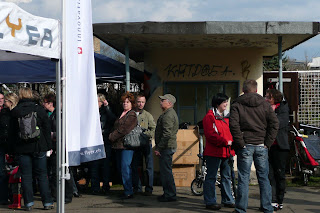 While the weather did not play along, it did not temper participants enthusiasm and both demo days went off superbly. Our IF rides were fully booked and we saw many a happy rider come back with ear to ear smiles. No words are necessary to communicate what they feel. 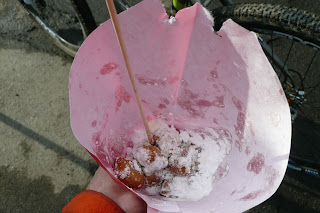 My visit was all too short, but still it was filled with great exchanges between a growing list of people whom I grown close to and admire. Quick and dirty as Gerolf put it, that is how I like it. But next time we will has to slow it down a little to uncover more of what one of my favorite cities has to offer.

Spring is finally here, the trails or in great shape and the warmth is begging us to go out and ride. Just in time we can find inspiration in some fresh rides from a couple of our customers... 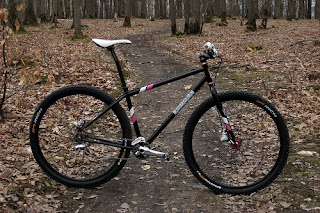 David's amazing 1x5 steel Deluxe looks more than capable of eating up his local riding trails around Paris. More on his bike can be found here and here. 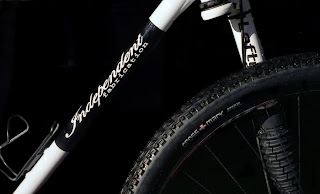 If you want to catch a glimps of this stunning ride, you will need to book a trip to the Belgium countryside. Gerrit's steel Deluxe 29er w/ Lefty is a stark contrast of black on white. More pics can be found on IF Rider

I put my own new tasty fresh ride through its first paces the past couple of days in theMountainbikepark Pfaelzerwald, riding some great local singletrack to include the Singletrail Parcours in Hochspeyer. Joining for me for ride was Sacha and his new Deluxe 29er. We pulled some laps on the singletrail parcours charging our big wheels down the sides of the Springertal, eating up the twisting - turning singletrack and all it had to throw at us. Both bikes performed absolutely perefct, great day of riding. 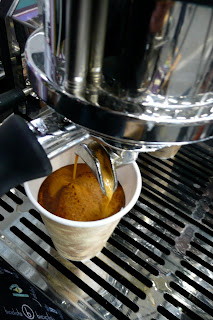 Berlin is a city torn between two worlds, one in the past and one living today. The two are a vivid contrast to other and often coexist on the same street block. The Berliner Fahrrad Schau was the backdrop for my exposure to this unknown world, seeing first hand how one of the most recognizable cities struggles with its split personalities.

Driving into Berlin is an experience in itself, going past the check point which many people had risked their lives to cross into a 'better' world, now an Autobahn streams right through it with no resistance. The only sign things are changing is that the asphalt turns from the smooth surface that the Autobahn is know for into a rough, unmaintained concrete as you drive in.

The expo was right next to the Deutscher Technical Museum, with an old US bomber that surely participated in the infamous Berlin airlift, shiny and silver, but still showing wear of years past perched atop a glistening new architecture. Around the corner ghosts from the past were whispering out of old run-down builds that time had forgotten. The Station itself where the expo was had not faired all that well over the years, but provided for a still comfortable yet industrial backdrop for the show.

Was set up, Stefano, Marcello and myself went for a quick lunch, hopping on the U-Bahn and getting off one stop later at the Pottsdammer Platz. It might have well of been a trip around the world to any big city USA because exiting we were greeted by taller buildings, Starbucks and a myriad of shopping possibilities. Money was abound and this section of town had obviously escaped the past. The only remanence was a section of the Wall that had run through there with a guy dressed up in old Eastern Block military garb stamping peoples passports as part of a tourist attraction.

Later that evening we went to another section of town for dinner, once again the present and past came together to create a unique blend of culture, buildings with bullet holes from a past war towered over trendy locals while beggars and street workers tried to make ends meet in the evening air. A thick layer of gravel covered the sidewalks and streets, signs of a harsh winter and lack of funds to clean things up, much like the past seen in the face of the many buildings and areas around Berlin.

The show itself was good, not great but good. What it lacked in attendance of both public and exhibitors it made up for in enthusiasm and passion for cycling. There were several very nice unique displays on hand around various aspects of cycling culture from reto-mountainbike collections to urban street cycling. And of course there were some good core companies on hand.

Attendees where largely urban-cycling oriented, but there were also plenty on hand who get the whole handmade/ custom bike thing, which was good for us. People poured over our presentation of bikes with the same detail in which they were made. They acquainted themselves with our brands and indulged us in pleasurable conversations over the cycling, coffee and their city. Our LaMarzocco also saw lots of action, not just from attendees, but other exhibitors. One of my pleasures was that catering for the even was all Organic, well not just organic, but really good food on top of that.

Much like the city, I really enjoyed seeing all of the bikes and culture from the show that represented the past, but also being able to draw a line from that to the present with some bikes that have direct lines to the past. My first visit to Berlin was an eye-opener, much like my past visits to the former eastern part of Germany. The sites and the people there have interesting stories to tell and despite the cold past, is one of the warmest places to go.

Here is some info on the Heike's Deluxe (which also happens to be the first bike in this 15th Ann year...).