Well I am sure everyone has heard of the "Big One", or the "Holiday Storm". Yeah, I was out in it, driving in snow can be treachorous, me, I think I am Peter Solberg in my Cravens Coffee prepared WRC Toyota Matrix. But with coffee machines weighing me down, they keep me from going balistic down powder covered roads. Still, a controlled drift here and there keep me entertained after hours in the drivers seat.

I have picked up the running, a lot, mixing it in w/ my nordic skiing regiment. The other evening, I was out on a snowy run w/ a headlamp to let motorists know where I was. When alon, I ran by the reflected light off the snowflakes, in a deafening winter silence. The flakes stung my eyes in a constant flurry. Then I would turn my light on to announce my presence, and the flakes became a visable static, still stinging my eyes in their constant bombardament. After the cars had passed, the lights went out and I was returned to my winter serienity.

Like many people today, we began our celebration of the Holidays, by getting an evergreen tree to bring inside. Unlike many, we choose the old fashioned means of skiing out into the woods to cut down our own. The roots (no pun intended) of tree use can be traced back before the birth of Jesus Christ to early Egyptians who would bring palms indoor as symbols of eternal life. Ancient Jewish religious feasts used decorations made of tree boughs.

In the Western world, most experts consider our use of trees during the winter holidays as derived from Rome. The Romans exchanged tree boughs with friends for luck. The Roman winter festival was celebrated by decorating the house with tree boughs and greenery. Trees were paraded around with candles and trinkets attached to the branches. And many Christian traditions in the home were borrowed from older pagan celebrations.

Once again, today we found ourselves outside, on a long ski from Crested Butte up to the Friends Hut, just below Star Pass. Along the way during my toil up the steep gradient, I would glance into the woods, or rather the trees. My eyes would select one or two each time I found the energy to take in the scenery.

My eyes were caught by a twisted, once proudly tall standing pine that had long been stripped of its greenery by time and the elements. But even this ghost of a tree, still stood tall and straight, a reflection of its younger days. It stood alone, yet proud.

Then there was a small group of close to the ground trees, hudling together for strength, but torn and worn down from the weather. I felt like they were watching me pass, as I bear witness to their eternally slow struggle, which made my own seem so irrelevant.

Others were shrouded in white, bearing the weight of past snowfalls, a sentence to be carried out until the spring thaw. Moss clung onto the tree admist the dense forest, dangeling like a muted green tinsle. Upon closer examination, colors burst out on the bark, as algeas and other crusty vegation added contrast to the earthy tones oozing up out of the ground on to the face of the proud giants.

Others had fallen victum to the passing seasons, and their branches reached up out of the snow calling out to be remebered, others were mearly a snowheap, an outline of their long robust bodies, now at rest under the winter blanket on the ground.

Once we came home from our adventure, I paused to take inour own tree, and what it represents. The closing of another year, and yet the hope for the new. Green symbolising life, standing tall and proud, and for growth while becoming stronger, to withstand whatever may come our way.
Posted by 34x18 at 5:34 PM No comments:

My first nordic race of the season, CB Nordic Series 10k skate. Nailed the wax, my skis were sooo fast. Didn't nail the start, stumbling and missing my poles off the line, it took me a short bit to get into rythm. It wasn't until the second big climb on the first lap that I began to settle down, my heart rate was coming out my ears. Wearing bib 61 (my Dad's race car number), I was working through the field, pinning back earlier starters (it was a staggered start of :15 between each skier). Gradually a really fast Masters skier came back to me, and latched on once I had passed him. It was great motivation to pull him around and do battle. But once again my poor early season technique would rare its head as I blew our sprint for the finish when i nearly went down. No biggy, 2:30 behind the big guns, and I don't know yet what place. Don't need to, I had a good race, know what I need to focus on, and know how much time I need to improve on to move up. 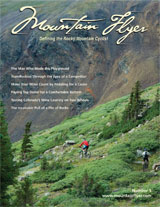 
The latest edition (#5if you are counting) of the Mountain Flyer is now on the news stands, epic photos, rides & stories, best issue yet. Worth the read.
Posted by 34x18 at 6:33 AM 1 comment:

Just walked through the door from a sweet & o' so fun 'training' ride. Picked up the Contour Trail after spinning out HWY50 east on my rigid SS to Tomichi Hieghts, and rode a ribbon of singletrack back to the Western State Campus that was divided in half by snow and dirt, sorta chocolate/ vanilla cookie, with lots of nuts, spices and rich flavor. Yummy. Thinking about how 'cross season was too short for me, next year I will be able to focus more on racing with the Gunni-Cross in a new promoters hands, and while I was basking in the glow of the soft afternoon light, how would it be in a long arm skinsuit right about now? 30F it would be on the cool side, but when your in the red with someone nipping at your heels, that wouldn't even bother me.
Posted by 34x18 at 3:51 PM No comments:

Well it looks like Dugast is setting me up with some of their new tubulars to try out, and I am not talking 'cross tires. They have a new MTB tread, and they will be glued up on some of the new Reynolds carbon wheels the Topo MTB Wheel. It will be interesting to see how well they ride in comparison to the tubeless variety I have come to love so much. Can't even remember when I rode tires with tubes last? I probably would not be able to even change a tube at this point. It sound like Frischy, a couple of top world cup riders and myself will be the only ones on these until mid-summer. Frischy should come and join Lance Armstrong and Dave Weins for the Leadville 100, that way Dave & Frischy could work LA over a bit. I think in Lance's last mtb race (NORBA National Mount Snow 1999) he was in the 30's somewhere, but I am sure as this race gets closer, the press will play out all of the stats. The circus is coming to town. 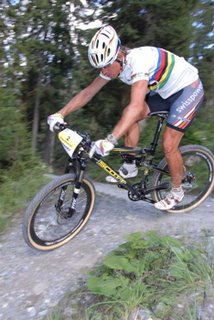 Frischy on his proto Dugast-Ritchey tubulars
Posted by 34x18 at 6:56 AM No comments: 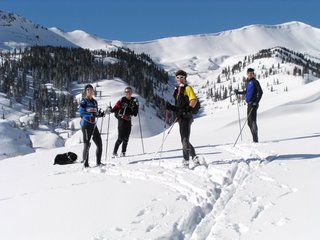 After a forray into the wild on Friday eve to land our Tannenbaum, Sandi & I were ready to try our new skins and ski up and over Paradise Divide above Crested Butte. Brian (who won the Grand Traverse last year) & Jenny Smith, Eric Sullivan, "Crazy" Dave Oochs and soon to be Mrs. Crazy Oochs all headed out from the Slate River trailhead for a days worth of skiing.

Once we hit the old town site of Pittsburg, we threw on our skins, Sandi & I just set up a new couple of sets of G3's for our Salomon Classic Equipe 10 race skis. By cutting a 90mm skin in half, we managed to create two very nice skinny skins for the both of us.

The skis and skins worked flawlessly today, and we were able to climb some 1500' w/ some ease, that is when you weren't the one breaking trail. At the top, the skins came off for a very fast descent, and if you have not descended on classic racing skis through powder, it is like riding a cyclo-cross rig down a World Cup Downhill - a whole lotta fun! The tour took us 4 hours & 20 minutes - Perfect!

We will be doing several traverses this season like today's, a little Telemarking, AT and snowboarding; I will try a Winter Tri (run, bike and ski- all on snow!), and some nordic racing, should be a lot of fun this winter.